What we can Learn From the Offices of Amazon, Facebook, and Google 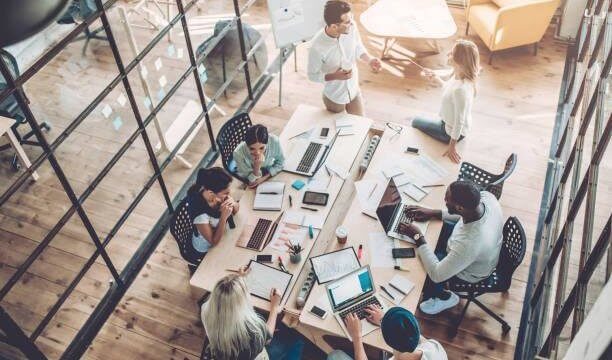 The Evolution of Office Design in the Last Decade

The evolution of office design runs parallel to advances made in technology, society and culture in general. This means that offices and workspaces are an excellent indicator of the state of progress in human society and their changes reflect on the continuous improvements made in efficiency and employee well being.

These changes are more drastic when you compare eras that are far apart, like the 1960s versus the present decade, for instance. Offices of that bygone era had a strictly traditional architecture and design, with more private workspaces or “action offices” – the early precursor to the much-maligned cubicles of today.

But when you compare two adjacent eras, the changes are often more organic and subtle. This is especially true since the beginning of the 1990s, as computers started to dominate the modern workspace. Most recently, changes in workplace design have become more tightly tied to the evolution of digital technology, the size and shape of its devices, and its capabilities.

Office design in the 1990s provided an early template

The 1990s brought the computer movement, and each desk was outfitted with a “bulky” desktop monitor. This decade brings to mind images of cubicles and a utilitarian feel. In the late 1900s, we started seeing the origins of more flexible arrangements, with open spaces and an emphasis on collaboration.

There was a gradual tilt towards a more relaxed and casual workspace design, with open areas, comfortable furniture, more colorful decor, and the addition of spaces dedicated to entertainment. That latter bit would have felt like heresy to managers from bygone eras when offices were strictly for work!

The more extreme implementation of these trends could be found in Silicon Valley, both during the early days before the Dotcom bubble, and in the giants that survived the crash and prospered. Companies like Apple, Amazon, and Google were pioneers of this shift towards more relaxed, collaborative, and creative workspaces.

Advancing into the 2000s

Moving into the 2000s, mobile phones became smaller. However, this doesn’t mean that communication decreased. Desks became less cluttered as emails were the main form of communication, leading to even less paperwork found around the office.

In addition, there was a trend towards casualness. Casual offices were designed to encourage personalized spaces. These spaces were suited to the long hours of workers spending their time analyzing information, designing graphics, and more. Plus, the dress of employees became more relaxed. Thus, the layouts of offices had to reflect the new “dress code.”

It was popular to find exposed brick walls and wood floors in offices of the 2000s. This shift away from utilitarian materials added character and style to the office while creating a pleasant environment for employees.

The 2010s were all about taking it to the next level

The Internet has revolutionized the way we get work done, with faster connections, sleeker PCs, and above all, more powerful mobile devices. In this decade, the modern worker can get tasks done from just about anywhere, even their homes.

In this context, we see office design adopt a more comfortable and “homey” aesthetic, with couches, bean bags, comfy chairs, and even beds (we’re looking at you, Google) becoming a part of the modern office furniture catalog. Warm colors and intimate lighting has also become the norm.

Companies are starting to take a more proactive role in improving the wellbeing of their employees. Many companies now order specially designed furniture that is ergonomic, with a heavy focus on comfort and health.

Drab and monotonous workspaces are a thing of the past, especially in company’s that promote creative collaboration. Brightly lit spaces that use natural light sources are more and more common as office design looks to accommodate mental health and well being.

Collaboration and communication between employees has become increasingly important, with office spaces making efforts to facilitate it. Face to face interaction and group interaction is encouraged in modern office design by the use of hubs and lounges.

Breakout zones are separate areas for employee socialization and relaxation revolving around leisure activities like video games, pool tables, and other forms of entertainment. But as social spaces become the norm, privacy also becomes important.

What’s In Store For The Next Decade of Office Design?

Sustainability is taking a central role

With the climate crisis and ecological impact becoming part of mainstream discourse, many offices are taking nature into account as well. Recycling, use of environment-friendly materials, reduction of plastic, and energy saving are all becoming an integral part of office design as we enter 2020.

The use of natural plants and greenery has become quite widespread in modern workspaces. With natural ventilation and sunlight, it is now possible to include more living plants in workspaces than ever before. And they also provide clear benefits in the form of reduced AC costs, natural air purification, and improved worker productivity.

How employees work best is considered in office design

In 2020, employers are realizing that their employees are most productive when their personal work style is supported. One example of this is providing flexible hours that allow employees to work when they are most productive. Some employees work better collaboratively, while some do their best work on their own. With the rise of the open office concept, providing both communal and private work spaces can pose a problem.

That’s why we created our sound dampening Loop Booths, to provide privacy for workers who need it, when they need it. Our Loop Booths allow employees to take time away from their desks to collect their thoughts, re-energize, engage in a confidential phone call, and more – without the distractions of an office environment. Our Loop Cube can even accommodate up to 4 people for private collaborative work.

Changes in office design in the last decade have pushed the boundaries of what we call the “traditional office.” With the concept of coworking gaining popularity around the globe, and trends like working from home and freelancing (gig economy), the very existence of traditional office space is being challenged.

In the next decade, we can expect these trends to intensify as technology evolves to have an even deeper impact on our lives. The need for both private and communal workspaces to coexist will continue to grow, as well as advancements that support employee production. We can also expect sustainability to have an even bigger say in office design as climate change becomes a central concern.